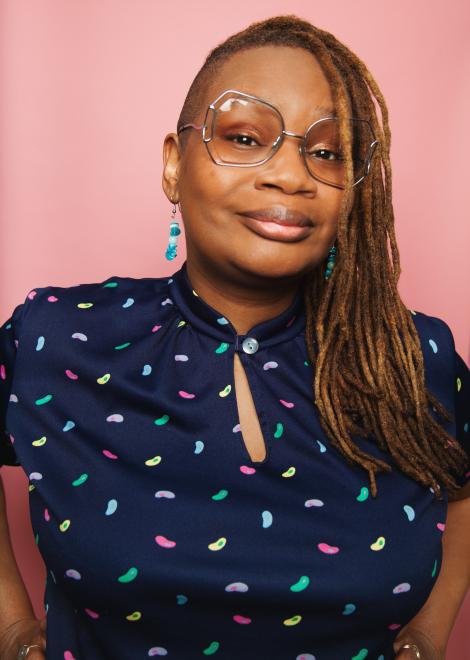 Shalewa Sharpe tells jokes. She developed her sly yet goofy style in Atlanta, where she was raised. Currently in Brooklyn, New York, she has joked on the extremely popular “Night Train with Wyatt Cenac” show and the influential weekly Comedy Night at The Knitting Factory. She has joked on “You’re The Expert,” a public radio game show featured on Boston’s WBUR. She has joked at festivals, too - at RiotLA (Los Angeles), the Eugene Mirman Comedy Festival (Brooklyn), Comedy Exposition (Chicago) and Red Clay Comedy Festival (Atlanta). She co-produces and hosts a number of shows, including “Thug Passion Presents,” a lively table read and celebration of classic Black movies. In May 2016, her debut album, “Stay Eating Cookies,” was released on Rotknee Presents Records; it can be found on iTunes & Amazon and heard on Spotify, Pandora, and Sirius XM radio. She tells jokes on Twitter (@silkyjumbo) and posts self portraits of varying success on Instagram (@silkyjumbo).